Why the Urgency About Reducing CO2 Emissions?

By Peg and David Engel

We founded STAY COOL for Grandkids, an organization of grandparents and others concerned about the dangers global warming poses to our grandchildren, because we feel that action to limit CO2 emissions is needed now. We believe these dangers are both real and already happening.

CO2 is a “greenhouse” gas that is released when fossil fuels such as coal or gasoline are burned. It enters Earth’s atmosphere and acts to trap heat energy, slowly but surely holding in more and more heat sent to us each day by our sun. Some may say, “Well, the average global temperature has risen only about 1.6°F since 1900. What’s the urgency in acting now?”

Perhaps those who aren’t worried believe that like many things in life, if our climate gets too hot we can always change our behavior and stop burning fossil fuels. Problem solved, right? No, unfortunately not. The CO2 in our atmosphere today is the accumulation of emissions released over the past century and more. CO2 molecules don’t quickly degrade and fall apart – they just keep piling up. So even if we stopped releasing fossil fuel-derived CO2 today (an impossible task), the CO2 that is in the air now will remain there for centuries. And the concentration is already dangerously high. 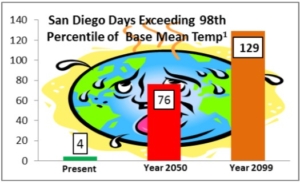 Presently the concentration of CO2 in our atmosphere is 400 “parts per million” or ppm. That may sound like a small amount. It’s not – it’s higher than it has been for at least 800,000 years. If we keep burning fossil fuels at our present rate, we will likely surpass 550 ppm by mid-century, only 36 years away. During that time our climate will keep getting hotter and hotter – here in San Diego we will experience a steady increase in the number of extremely hot days (>90°F).

In the past four decades, we have averaged just four really hot days a year – by 2050 our children and grandchildren may have to cope with as many as 76 such days each year. By 2099 the number may be 129 days.¹ And this won’t be something our grandkids and future generations can change – there is no known technological “fix” for lowering atmospheric CO2. It will stay high for centuries and so will the temperature of San Diego and the Earth.²

By now we hope you share our concern about the dangers global warming poses to our grandkids. The urgency of taking action can’t be overstated. The good news is that there still is time to lessen the worst effects of climate change on future generations. One of the first things we encourage STAY COOL for Grandkids members to do is to talk about global warming with their friends and family.

As Richard Somerville, a leading climate scientist from Scripps Institution in Oceanography here in San Diego often says, “There is no silver bullet to fight climate change, but there is silver buckshot.” There are many actions we can take individually and as communities to reduce CO2 emissions. In future posts we will explore some of the most promising of these.